skip to main | skip to sidebar

As we say above, this is mainly for friends and family. Michael's blog on the Middle East can be found here. Most of our other links can be found below on the right, but be sure to keep up as well with our family website, here. We also have discussion groups for genealogy, links to genealogical information on us, and our (semi-private) Flickr and YouTube accounts for those who are invited. You can also get a quick-navigation guide here.

And I made it! Too bad Lennon and Harrison didn't. Paul and Ringo got there before me, though. I remember when it sounded remote ("many years from now"), but at least I'M not losing my hair.
Posted by Michael Collins Dunn at 9/17/2011 07:28:00 PM No comments:

A winding-down day, much of it spent following the progress of Hurricane Irene, and planning our return around its course and timing. A little more exploring of the resort and a lot of relaxing. I didn't take any video. The high point of the day was that the dog got out while Tam was taking trash out. He ran off and started chasing a service guy working on cleaning one of the other cabins. Coco chased him up the steps of another cabin, but did not follow up the steps. He had "treed" his prey and waited for the hunter to arrive. When Tam was not appreciative he came back to our cabin on his own. Tam apologized to the treed raccoon service guy.

Day 5 (yesterday) was a quiet one. Mostly Wildside (an arcade/entertainment area) and minigolf with Sarah. Here's the video:

Back when I was growing up our parents' generation took movies with Super 8 movie cameras (no sound: just picture) and/or slides, and then invited friends, relatives, and long-suffering neighbors over to watch their movies/slides of their trip to Yosemite, somebody's wedding, etc. It was a test of the strength of a friendship: how many people's slides of Yellowstone can you stand to watch?

Today, more mercifully, there is YouTube, blogging, and Facebook. I can put my home movies all over the Internet and pretend every close friend and relative is watching them. But without a lot of monitoring software I have no intention of using, it's still just pretend: you don't have to watch these, and I have no way of telling.

Day 3, the longest day of video on this trip to date, took most of last night uploading, and the upload failed. So for now, skip day 3, and here's day 4:

Here's the Day 3 Video. Though it was uploaded out of order, I have tampered with the space-time continuum so that it appears in its proper order.

Our Internet has returned. Today was a quiet one; it rained all morning; in the afternoon Sarah spent time at the Wildside, basically an arcade and entertainment center, and we picked up some groceries at the WalMart in Uniontown. Tomorrow will be much more active.
Posted by Michael Collins Dunn at 8/25/2011 10:04:00 PM No comments:

Jeez. Leave home for the week and Washington has 1) an earthquake yesterday.We hope the house is intact, since they're going to have 2) a major hurricane on the day we drive back, to demolish whatever survives. (Just kidding, I hope.)

I'm assiduously making  movies of each day of our vacation, but yesterday and today it has turned out that "Free WiFi" meant "once in a while," and since YouTube uploads of long videos can take hours (the WiFi's not that fast, either), I may not upload any more videos till we get home, unless the WiFi comes back on. How am I posting this? Well, I'm -- well, I'm using a method that is probably legal but not kosher entirely, so I won't say anymore. Bandwidth is, however, limited.

I did want to get one story on the record before the memories fade. Sarah has become a fan of astronomy, one of my enthusiasms around her age as well. But she's grwing up in the suburbs of Washington, DC. So last night after dark we drove to a dark spot (the driveway into Fort Necessity National Battlefield), and despite provoking the curiosity of a park ranger, showed her the stars unimpeded by urban light pollution. For the first time in her eleven years, she saw the Milky Way. She was stunned and awed and thankful, and it really makes you realize what we have lost with our city lights. She thanked me more than for all the things we've spent lots of money to do. For her, seeing something I could see from my front yard in my childhood was a greater revelation than anything. My God, what have we done?

Today was hanging out; she did a horseback ride, miniature golf, and saw the resort's rather uninspired "zoo," which provoked some cynical comments.
Posted by Michael Collins Dunn at 8/24/2011 09:46:00 PM No comments:

Days One and Two: The Movie

Video from days one and two of the vacation:

It's our first night of our 2011 vacation. We;re rentiuging a condo/cabin on the grounds of the Nemacolin Woodlands Resort in western Pennsylvania, just down the road from Washington's Fort Necessity. We're tired and worn out so videos etc. will wait a day or so. I did use Twitter a bit from my phone but only did three tweets. Edited t remove typos introduced by my fat fingers on a phone keyboard, they were:

9:30 AM. Car loaded and ready to roll. Dog has the most luggage but did not help pack or load. Slacker.

Out of driveway 9:34 AM. Willie. Nelson singing "On the road again" on stereo.

5 pm At Nemacolin Highlands Resort since about 2:30. Morwe n Dunn blog. All is well despite initial problem with the Wifi.

Nothing earthshaking there. Traveling with the dog limits options for lunch and dinner, so it was drive-thrugh MacDonalds for lunch in Cumberland, MD, and carry-out pizza for dinner. Once we stock the kitchen we''ll have more options. Still, travel with a neurotic dog has its downsides.
Posted by Michael Collins Dunn at 8/21/2011 10:29:00 PM No comments:

"Gotcha Day" Celebrations and a Video

Today, as I already noted, was out 10th celebration of "Gotcha" Day.  Sarah, now 11 and ready to begin Middle School in September, joined us at the Sackler and Freer Galleries of the Smithsonian to look at Chinese art, then we went home and watched the videos of our original meeting, and then went out to one of her favorite Chinese restaurants, the Hong Kong Palace. 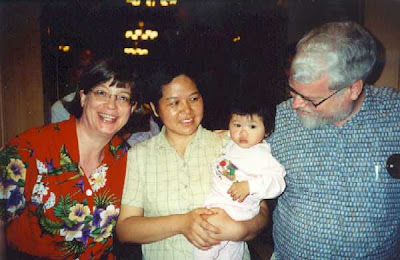 Ten years ago today, at about 1 pm China time (about 1 am DC time) in the Beijing Meeting Room of the Grand Sun City Hotel in Changsha, Hunan, China, Tam and I met our daughter for the first time. Chang Xiao Chao, then 14 months old, is now Sarah Grace Dunn, 11 and off to Middle School in September.

The official adoption took place in Chinese government offices the next day, and her American citizenship dates from her first setting foot in the US (in LA, unfortunately), but July 2 will always be "Gotcha" Day, the day we were united with her.  Along with her birthday, it's a key date we celebrate, and the 10th anniversary is particularly meaningful.


"Who are these strange-looking people?": 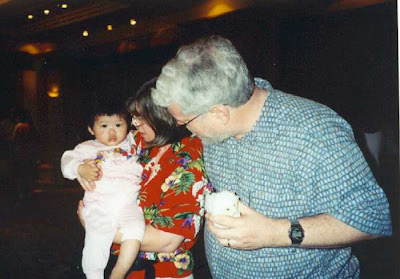 Homage to Harryhausen: All the Great Monsters in One Clip

I'm so glad I found this on the weekend the latest Transformers movie opens since it reminds us of the days before CGI, when we had to live with stop-motion animation of rubber creatures: AND WE LOVED IT.

Ray Harryhausen may not be a household name among the masses, but it certainly is among animators: in the Disney/Pixar classic Monsters, Inc. the fancy restaurant is called "Harry Hausen's." Harryahausen is, apparently, still alive at age 91, according to the Wikipedia link just given and the  official website here.


If you grew up in the fifties or even the sixties you saw Earth vs. the Flying Saucers or The Seventh Voyage of Sindbad (dueling skeletons!) or various movies in which the rubber monsters were more credible than in those Japanese Godzilla flicks, you know Harryhausen's work if you don't know his name. Somebody's put together the ultimate tribute critter mashup. 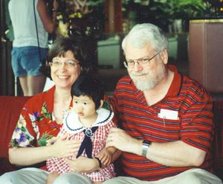 About the Dunns (Not Much Here if You Don't Know Us)